So, it turns out I never posted a summary of our Horror Movie Month for 2015! I tried to recreate our viewing list by looking up my tweets, but there are a bunch of days with no movie tweet. What happened? I’m not sure. Anyway, here’s a very late summary, missing days, and with a year’s clouding of my memory. How accurate will it be? Who knows!

If I was more dedicated, I’d go find all my tweets from these days to reconstruct my thinking at the time. But I’m not.

October 1: Incident On and Off a Mountain Road

This was the first of several Masters of Horror films that we watched. As with most of them, I thought it had an okay idea that didn’t really work out. We were annoyed that the movie seemed to be setting up one kind of scenario, but then it was something else entirely.

There have been a few horror movies told through video chat. This was one of the better ones, but it still wasn’t great. I guess I don’t regret it.

All the Boys Love Many Lane, too, wasn’t great, but I liked the ways it defied or subverted several genre norms.

It was still very good. I think this is probably one of my (and our?) favorite slasher movies, because it’s scary, funny, and smart. Like many of the best slashers, though, it only works because you know the genre tropes. That’s okay, though, because we all do!

Afflicted was a good take on the “something bad happens on a road trip” movie, and much better than many similar movies I’ve seen. Found footage, though… even though it often makes sense in the movies being made, it’s a technique that needs a long rest.

I really liked 13 Sins. It wasn’t great, but I enjoyed its little twists, and it worked as a (very) dark comedy.

We hated the 2015 season of American Horror Story and gave up after a couple episodes. The story was a mess, there was too much going on, and we didn’t care about any of it. Also, we found a number of the actors’ performances to be really dull.

I liked it. It wasn’t the best thing ever, but I liked the characters, I liked the story, and I liked the way its tone varied into places we don’t often see in movies like these. There’s a great scene in which the protagonist is riding to town with a busload of (other) senior citizens and nothing much happens.

I don’t remember it well. My recollection is that it had a bunch of really tired tropes, but did okay despite them… but it wasn’t great. “Everyone is locked in a room and has amnesia” is something we’ve probably had enough of.

Gloria had already seen this and consented to watch it again. Why? Because it was good! Gloria likes horror comedies, and so do I, but I keep thinking we should watch serious ones, too, and I’m almost always wrong. In Housebound, a young woman in New Zealand is sentenced to house arrest and slowly begins to realize that the house is haunted. Hollywood would probably make this movie really gritty and creepy and shot in lots of sepia tones. Housebound was funny and surprising and weird. It took a couple twists that surprised me and made me laugh. Endorsed!

I’d put it in the same bin as the earlier Child’s Play movies, but better than most of them. That said, it was only okay, at best.

Terrible. Awful. Why did they keep making these? I do mean to finish watching the series, but only because I am an idiot. The only thing I remember liking was “The DJ,” a cenobite who throw compact discs with lethal force.

Really, it was just terrible.

This was another Masters of Horror that didn’t deliver on its potential. It was okay, and I’m glad I saw it, but I’d like to see it done over again. It’s about two competing serial killers, which was a fun concept.

I learned about Masters of Horror existing because of this movie. I was looking for more films by Larry Cohen, whose work I’ve largely enjoyed.

This was fun. Like 13 Sins, it’s about some guy who gets told to do increasingly weird things to make money. It’s also got a darkly comedic streak. I enjoyed it!

Blind woman terrorized by masked killer. I barely remember it at all. We’ve seen enough of these movies that I do remember, so this one is probably best ignored.

Road trip! A bunch of friends are traveling around and looking for the scariest haunted house experiences around the country. There’s this rumor that a super-secret one exists that is way scarier than you’ve ever seen before.

Sounds like a great concept, I thought! I found it disappointing.

October 20: Dreams in the Witch House (Masters of Horror)

This was one of the better Masters of Horror that we watched, but it was still mostly just okay. I enjoyed that it was a pretty faithful adaptation of Lovecraft, since so many adaptations change too much.

This is a 1984 horror movie about an enormous bloodthirsty razorback boar that kills people. It’s basically Jaws, but in the outback. This movie was not good, but it was pretty weird. It seemed like, “If this is even sort of what 1984 rural Australia was like, then Mad Max seems like a much more plausible vision of the future than I thought.”

It’s a Masters of Horror film. Like many of the others, it was interesting, but not really great. That said, it’s probably my favorite piece of horror work by Dario Argento, whose films I usually find sort of overwrought. It was nice and creepy.

I had entirely forgotten this film until I re-read the Wikipedia page just now. I can’t say whether I liked it or note. I think, if I recall correctly, that it had a few good moments, but was otherwise mediocre.

This movie had a good twist, but I think it maybe gave it up too soon… but it might have been pretty hard to keep it hidden for much longer. It had a lot of good talent (Ben Kingsley!), but it could’ve done more to be creepy and not just weird.

I heard so many good things about this film, but I was really hesitant, because I’m not much of a fan of Clive Barker. It was so-so. The Nightbreed themselves were weird, but not very compelling. I would’ve rather re-watched Basket Case 2.

This was probably my favorite of the Masters of Horror movies that we watched. It’s very much in the spirit of H.P. Lovecraft, at least until the strange (but good) ending. It reminded me in many ways of Carpenter’s earlier In the Mouth of Madness, which I think was (as I recall) a better film, despite a number of scenes in Cigarette Burns that were more nuanced and interesting than anything in Madness.

I barely remember this. As I recall, it was much creepier than I expected, but had a bunch of other problems. It was one of the many (many? well, enough) webcam movies we watched in 2015.

This was a dark comedy in which dead American soldiers rise from their grave as zombies, with just one desire: the vote. They plan to vote for anyone who will end the war. The film focuses on the campaign staff of the sitting president, who supports the war, and has to spin this the right way. The movie had a lot of problems, but it was good enough in other ways to overcome them.

So, this was something like Carrie, or Firestarter, or Scanners. There’s a secret government plan to weaponize psychics, and of course things go wrong. It was mediocre.

This was an Iranian film — I think. It was filmed in Persian, anyway, and directed by an Iranian woman. I remember it only faintly. I recall liking what they did with a cat.

This was my then-eight-year-old daughter’s first admission to Horror Movie Month. It’s a film by Larry Cohen, whose films I really like. In it, a weird white goo is found bubbling up from the frozen ground by someone who seems to be an industrial site night watchman. He looks at it quizzically and then, of course, tastes it. It’s delicious!

Months later, The Stuff is the number one dessert in the country. People love it. They eat it for all three meals, plus snacks. It’s a huge sensation, even if the ingredients just say “natural ingredients.”

A young boy runs away from his family because they’ve lost their minds for The Stuff. He teams up with Michael Moriarty (who appears often in Cohen’s film) to find the secret of The Stuff and stop it from consuming all the consumers in the world!

After the movie, we treated ourselves to some of that wonderful Stuff! 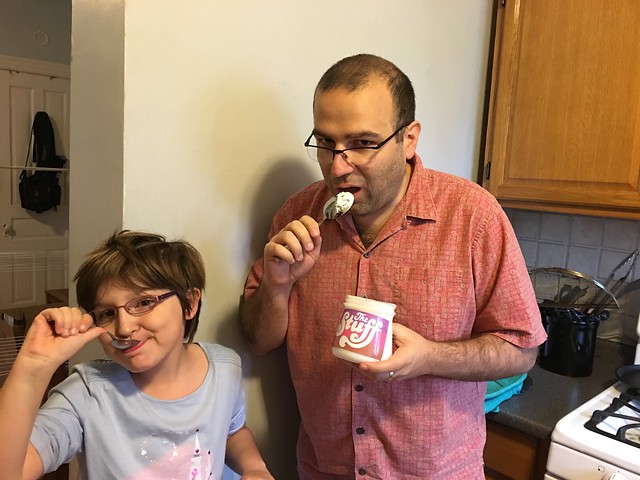