YAPC actually only runs two days, or three if you count “RejectConf” on day zero. So, this entry is not really about YAPC::Asia, but about what I did between the end of the conference and my trip home.

I woke up at the YAPC hotel, got some breakfast (fish and okayu!) and packed my bags. The plan was to visit Nikkō with Shawn, Dustin, and Karen, and my first step was to get to Kita-Senju Station, one of the busiest stations in the Tokyo Metro system. This was easy (although I was flagged for not having paid properly on my last trip, and had to pay more). The complicated part came when I had to find Shawn and Dustin, then Karen, and then get seated. Karen and I ended up in a different car from Shawn and Dustin, each of whom was seated in his own car. I was seated directly in front of Karen, but moved back to be able to speak with her. Doing this seemed to put the conductor in a very awkward situation. He apologetically reseated us at the rear of the nearly empty train, although nobody ever seemed to take the seat I’d taken, or really to seat near where we’d been at all. I was curious, but it seemed best not to ask.

Nikkō was a pretty little town. Although its population is ninety thousand, it seemed very much like a one-street town. We dropped our bags at the hotel and headed up the hill toward the temples and shrines. Partway there we stopped to get lunch, but after the party in front of us was admitted to the restaurant, the “closed” sign came out. “Sorry,” said the restaurateur. We moved on and stopped into a little two-table mom-and-pop place where I had a totally okay bowl of udon. 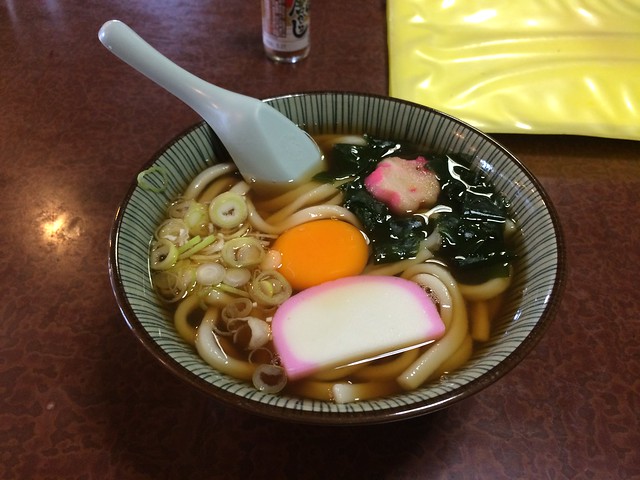 After lunch, we finished our trek uphill and eventually got to the site. My first order of business was to down a bottle of Pocari Sweat. Sure, it was grey, overcast, and drizzly out, but it was also hot and muggy, and I was dehydrating even though it I was walking through a mist. After that, I took some time to look at the site, and it was quite impressive. We were briefly worried when we saw that one of the main buildings had been entirely surrounded by a temporary and very ugly building during restoration. Fortunately, though, it was the only one. We continued on into the complex and found dozens of beautiful buildings and paths.

Unfortunately for me, I had no idea what we were seeing. I had skipped out on the ¥500 audio program, and all the signs were in Japanese. I had it in my head that it was all Buddhist, and specifically related to Nichiren, but I later realized that I had confused Nikkō the town with Nikkō the priest. Although this was an embarassing confusion, I was at least pleased that my memory had held on to any of this material! In fact, the site is a combination of Buddhist and Shinto structures, which is pretty reflective of Japanese religious tradition. It was sometimes clear what was what, but at other times I had no idea just what I was seeing. If I went back, I’d get the audio guide. 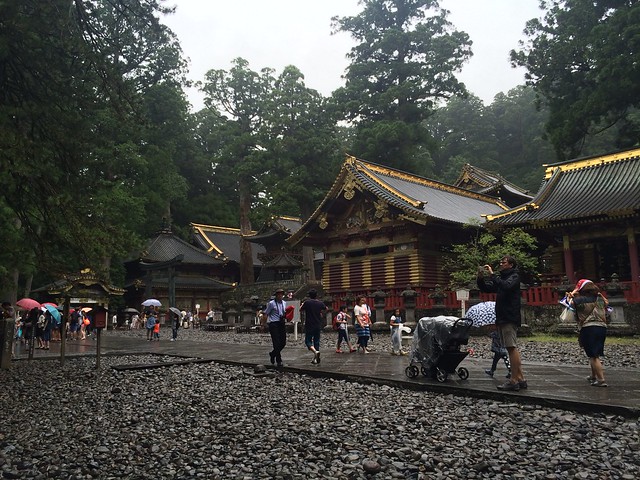 One thing that I didn’t capture well in any of my photos is the verticality of the site. Between sets of buildings there were many long flights of stairs. The stairs were slick, wet stone without handrails. Once or twice, someone above us would slip or drop something, and there’d be a moment of panic as I wondered whether we were all about to go down like tenpins. Fortunately, it never happened. It felt like we’d made it quite a ways up, but there was more to go. Eventually, we decided we’d gone high enough, and headed back down. That was just as harrowing, but a bit less exhausting.

On the way back down the hill toward our hotel, I decided that I wanted to get ice cream, but we never saw anything that captured our interest. I was hoping for something slightly more interesing than random soft serve. In the end, I ended up getting dango, which I’d seen on the way up, and was puzzled by. I had no idea what it was, even when I ordered it. I think that what I got was mitarashi dango. Once I tasted it, I understood. It was three balls something made from rice, a lot like mochi, painted with something very much like the sauce on unagi. It was quite tasty, although I think I would’ve preferred it without the sauce, or with something sesame-based. I’d definitely order it again, though.

Also on the way back, we saw monkeys! There was a group of many six monkeys, one of them carrying a baby on its belly, and they crossed the road on the electrical wires and vanished onto the nearby rooves. Woah.

Karen headed back to Tokyo, and the rest of us went to our room. We were all exhausted. There was a brief chance that we’d be social when I went looking for a beer vending machine, but it turned out the hotel vending machine only had soft drinks. I thought maybe I’d try to get just a little more work done, but bad luck struck: my laptop was busted again. Just like several weeks earlier, the keyboard and trackpad were no longer recognized at all. I couldn’t log in or do anything else. I made sure I got my 3DS and iPad charged for my upcoming trip back.

I fell asleep at some absurdly early hour and woke up around 3:30, when Shawn also woke up and snuck out to do some walking around. I stayed in bed to try to get some more sleep, but had no luck. Eventually, I headed to the Tobu-Nikko station to head into Tokyo and toward Narita. I got my ticket and made it to Tokyo station without human assistance, and I felt quite proud of that! (To be fair, I got a bit muddled getting from Kita-senju to Tokyo station, but I did oaky.)

My goal was to deposit my bags at a coin locker in Tokyo station, to visit Tokyu Hands and the Pokémon store, and then to head to Narita. The problem was that while both shops gave some basic instructions on how to find them, they were both located in huge shopping centers, and those two shopping centers were connected to one another. Nearly all the signs were in Japanese. GPS was no help. All the coin lockers were taken, so I was hauling my luggage everywhere. I nearly gave up on finding anything, but eventually I accomplished my missions: gifts for Martha and Gloria… and for me. It’s almost two weeks later, and Martha is still her Ditto everywhere, though, so it was worth it.

The trip to the airport was fine. Once there, I had lunch with Marylou, who was flying out near the same time. We had tempura. I’ve never been a big fan of tempura, but all the tempura that I had on this trip made me think I should give it another chance. I killed a lot of time in the ANA Narita lounge, but I found it pretty underwhelming compared to the Air Canada lounge I’d visited in Toronto. Then again, I’d later find myself in a different Air Canada lounge in Toronto that was a dump comapred to the Narita lounge. Each one, though, amused me with its beverage selection. In Tokyo, they had pitchers full of Pocari Sweat. In Toronto, they had cans of Fruitopia, which I thought had been lost to history fifteen years ago.

It seems like this is probably the last YAPC::Asia in Tokyo, at least at this scale, or at least for a while. That’s too bad, because each one I went to was excellent, and I was always honored to be asked and delighted to accept. The up side might be that some other amazing place picks up the YAPC::Asia name. How about Manila? Hong Kong? Taipei (again)? I’ll be interested to see what happens next, and whether the next YAPC::Asia is another “festival for engineers,” or a more purely Perl-o-centric conference. All I hope, though, is that the attendees have a good time, learn some useful things, and leave with some good feelings for the people and maybe for the language, too. I suppose I also wouldn’t mind an invitation to speak!

Visiting Japan was excellent, as it was on my previous visits. The best thing about YAPC::Asia in Tokyo being over is that the next time I go to Tokyo, it will have to be as a holiday, with my family, with nothing to do but enjoy the city. As long as I can manage to get onto Tokyo time, I think that will come quite easily.

Until then, I’ll have to make do with the notebooks I brought back from Tokyu Hands, the recipe for okayu that I found on Google, and the really excellent Terakawa Ramen in Philly’s Chinatown.