I woke up early again on the 22nd, some time before dawn, and did some preparation for the conference. It was my day for speaking, and I wanted to make another pass through my slides. Eventually, it was six thirty and I decided to figure out what I could do for breakfast other than Starbucks. I went to look up “breakfast near Sunroute Ariake Hotel” and found a bunch of reviews in which people praised the hotel’s breakfast. Marylou had said it was just soup and bread, and that’s when I realized my error: I had trusted someone from Pittsburgh.

It turns out that the other hotel restaurant, on the second floor, had a full buffet. It was just like the one in Shinjuku, but with a better selection and worse music. I’d been sad that there was no fish on the menu in Shinjuku, but had enjoyed the all-Beatles playlist. There was an endless supply of broiled Pacific saury at Ariake, but the music was all music box versions of 1980’s hits. I think I listened to a ten-minute long version of “Take My Breath Away” while eating. I ate plenty of fish, a lot more okayu, and probably too much of other things. I am a big fan of the hotel breakfast buffet!

At the conference, I got to work adding a few sections to my slides. I especially wanted to discuss how some of the Unicode changes worked with Japanese text, but I didn’t get to add everything that I’d wanted. The short version of it was this: \b isn’t very useful for Japanese text, and ‘\b{wb}` isn’t much better.

Before I finished my last-minute editing, it was time to meet with the translators. In previous years, I’d been asked to supply my slides a week or two in advance. The YAPC volunteer translators would then, a few days later, send me a text file of Japanese subtitles, which I’d add to my slides (at the airport). I viewed this as an amazing service, and a lot of work that probably deserved more thanks than I remembered to give.

This year, though, the team went well beyond that. Instead of getting slides subtitled, they had live simultaneous translation provided by professional translators. I had a scheduled meeting, an hour long, an hour before my talk. I figured this was sort of a window of time: at some point during it, I’d be called in for a little while, and that would be that. Was I ever mistaken! I had been asked, a few weeks ahead of the conference, to provide my slides. I sent them what I usually give for my slides: a build-by-build PDF. Each addition of a bullet point was a new page, so you could easily step through the talk to see how it would be presented.

When I got to my meeting, the translators had a printout. I was aghast! It was something like four hundred pages, white on black. The translators were somewhat stunned, too. “Are you really going to do this many slides?”

Fortunately, we cleared things up pretty quickly. They’d made printouts to annotate with notes to help with the more technical details. The translators were technical, but they needed information on some details that they weren’t familiar with. (This made things fun. One of them asked me, “Why would you ever want hex float literals?” and I got to explain.) They also inflate my ego a little by telling me that they’d watched a video of my talk and found me to be an interesting speaker. I wasn’t quite sure what to think, though, when they elaborated that it was because I “liked to trick, and lie to, the audience.” I understood, though, that they were a little worried about my constant nonsensical digressions and jokes. They were also worried by my incorrigable punning. They also were intrigued by the word “backwhack” for “backslash.” It was a fun meeting.

The meeting actually took almost the full hour, and left me with just enough time to clean up the slides that I’d left in progress, drink some water, and otherwise get prepared to speak. I think the talk went well. I tried to avoid too many verbal embellishments and puns. You can decide how I did for yourself, because the talk is up on YouTube. I was really curious how the translation went, because even at my slowed-down speed, I spoke fairly quickly. So far, all I’ve heard were good things. It must have been hard work. Later, someone told me that the each translator would only do a small amount of work each day, because it was so taxing. I bet!

After that, I was here and there, chatting, recovering, and otherwise enjoying the hallways. Bento box lunch was provided again, and this time speakers were given the choice of several fancier boxes. I picked one more or less at random, and it was tasty. 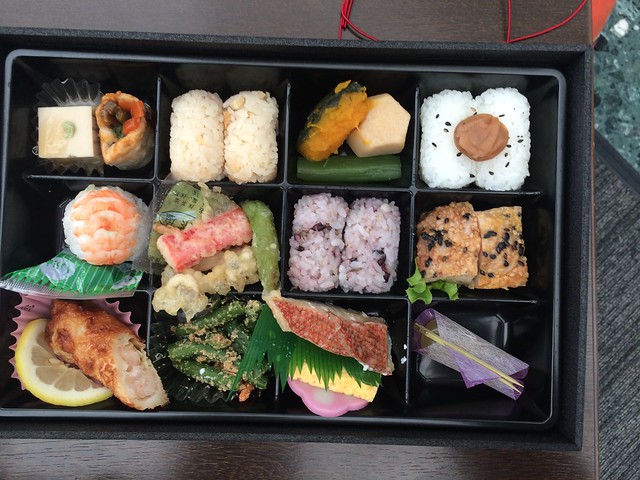 After lunch, I saw Miki and Marty give a talk on how containers work, including “how to write your own containers in Perl.” It was excellent, and was among my favorite kinds of talks. It took a topic that many people know about and then explained the underpinnings that most people don’t understand. I’m a big fan of these talks, because they demystify things that programmers use all the time without really understanding. Using things you don’t understand can be convenient, but it makes it really hard to act rationally when things go wrong. I think I’ll probably re-watch this talk on YouTube sometime when I’m more alert than I was in Tokyo.

Marylou gave her talk on posture, which was good, but I wish I could’ve seen things being demonstrated from way, way in the back. I was reminded that the Japanese seem to be excellent at squatting, and that maybe I should work on that myself. After that, I caught the second half of Jonathan Worthington’s talk on concurrency in Perl 6, which was quite interesting. Brad Fitzpatrick gave a talk on profiling and optimization with Go, which did a good job of showing off the Go tooling, much of which I hadn’t seen before. It was impressive.

I attended the lightning talks, the same as I had the day before. I was almost totally unable to follow them, save for a few with enough English on the slides. Despite that, they were great fun to witness. The energy level was way, way higher than has become the average level at YAPC::NA, and most talks drew boisterous laughter. I wish I could’ve followed along more, but it was great to see everyone have such a good time. I haven’t done a lightning talk in years. I better change that next year, assuming we have a YAPC::NA. Still no venue! (I’m voting for Philadelphia!)

The closing remarks came and went, mostly going over my head, and everybody left. I lagged behind, though, with a bunch of other foreign attendees, chatting and planning dinner. While we waited, the conference volunteers (numbering about sixteen thousand, as I recall) had a final meeting and did some group photos. It turned out that there were one or two staff shirts left unclaimed, and one of them was given to me! I have to say, it’s almost certainly the best conference shirt I’ve ever gotten. I don’t have any photos of me in it, at the moment, so here’s one of the volunteer corps: 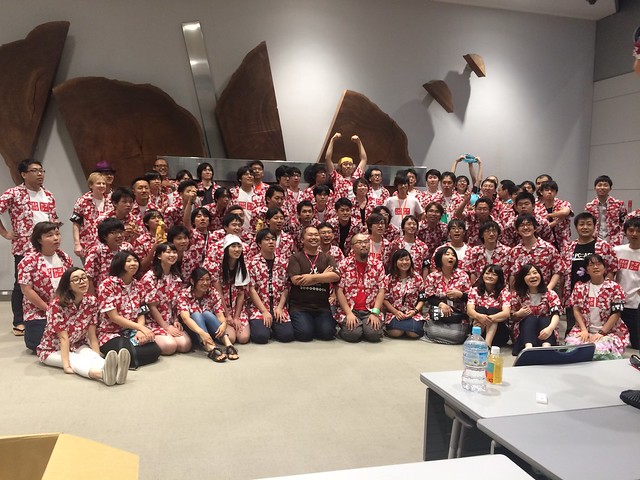 As for dinner, I was adamant that I wanted to eat ramen. Marcel seemed a little reticent to commit to eating in the bay, since the food scene didn’t seem to be much of a scene, but we ended up sticking together, probably because I looked like I could not possibly be gotten to do anything else. I think we had a good time, though, and I’m not sure it would’ve happened without Marcel, who helped figure out how to get where we were going once we were at the right GPS location. (Several times in my trip, the GPS got me to a place, where I’d realize that it was more or less just getting me to the right block, and after that I’d have a million cubic meters to search through.)

Marcel, Marylou, Casey, and I made it to the food court of Aqua City Odaiba, a big shopping mall in walking distance of the conference. It was just a bit of a hike, but not bad. It was hot, though, and I drank several bottles of Pocari Sweat on the way there (and later on the way back). We all got ramen. I think Casey and Marylou got slightly tastier ramen than Marcel and I got, but I wasn’t bothered, because the ramen I got was unlike any ramen I’d had previously. I also had some beer, which was a good accompaniment. It was Asahi Super Dry, which tickled me, because I’d just read about the “Dry Wars” that erupted in the Japanese beer scene in the late 80’s. Super Dry is a totally acceptable Pilsner, which I enjoyed but didn’t find outstanding. The idea of a “wars” fought over any title it might hold amused me. Of course, we had our Cola Wars, so I can’t claim any sort of cultural superiority on our beverage pacifism. 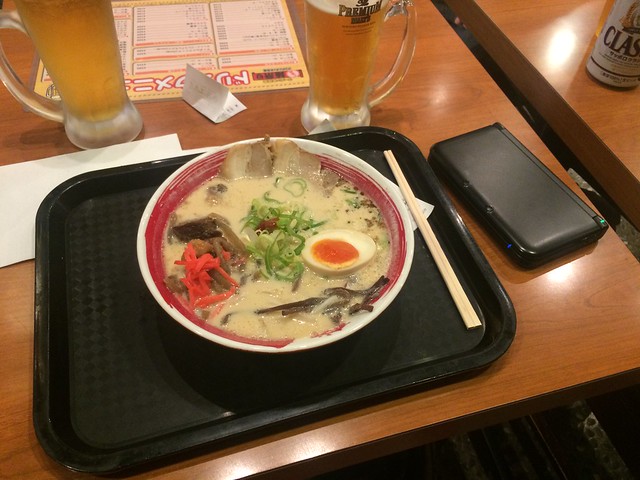 (Note also my 3DS in that photo. Tokyo was a non-stop Street Pass fest. Every time I checked, I had ten or so new tags! I cleared a lot of levels in plaza games, I can tell you!)

On the way back, we stopped to see the giant Gundam statue near another shopping center in the bay. It was neat, but I was more interested in making another trip to Tokyu Hands, because there was one there. Sadly, it had closed about ten minutes earlier, so I contented myself with getting some shots of the robot before heading back to the hotel.

YAPC::Asia was over! YAPC::Asia has always seemed very short to me, as a conference. As a non-speaker of Japanese, there are a lot of events that I can’t really take part in, and a lot of people in the hallway whom I can’t accost and chat up. I know, from being on the other side of that, that it’s hard to make someone feel comfortable in, let alone part of, a group that’s quite literally foreign to them. I think that the organizers and attendees of YAPC::Asia did an excellent job of it, but in the end, there is a gulf left between me and the mass of attendees, and I think that contributes to things seeming to go by so far. It’s hard to milk every minute as I might do in YAPC::NA. I hope to keep this in mind in the future, though, and to keep trying to make would-be outsiders feel welcome when I can.

I’ll make one more post about my trip, covering my post-YAPC activities, in the next few days.