I woke up really early on the 20th and did my best to kill time. I called home, I reviewed my slides and re-packed my bag. Part of my goal was to delay until breakfast was served, so I could eat something before heading to Ariake for the conference. I wanted to see whether the okayu had been relabeled, too! Around 6:20, though, I couldn’t stand any more waiting, and I headed out. This way, I figured, I’d avoid rush hour.

It almost worked. Tokyo’s rush hour is well-known for being crazy, and I’d be departing from Shinjuku station, one of the busiest stations in the city. I got to the station just after one train left and decided to wander around, looking for a bite to eat. I didn’t have much luck, and headed back to wait for the next train, about a half hour. While I waited for the next train to Ariake, other trains came and went, and each one was busier than the last. By the time my train came, rush hour was clearly arriving. Still, I got on and even managed to get a seat pretty quickly.

I got off at Kokusai-Tenjijō, along with a huge crowd of men in identical suits. They all headed directly to Tokyo Big Sight while I headed to the hotel. I was amazed to see the conference center so close, since I’d totally missed it on my trip down before. Of course, then it had been dark and I’d been exhausted. This time, you couldn’t miss it. 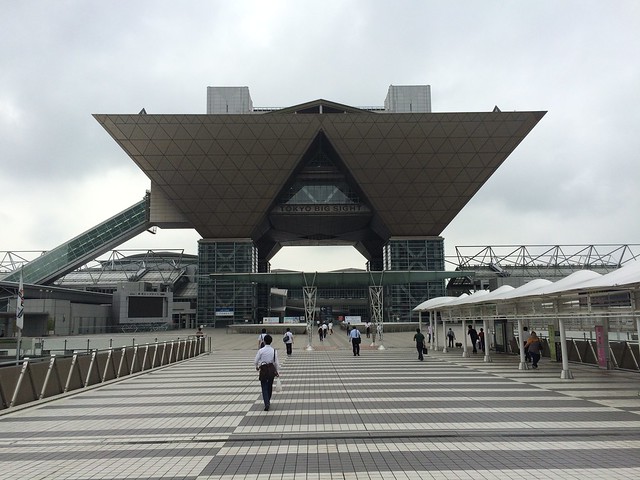 I checked in, ran into Marylou, and headed to the conference to register and find something to eat. Marylou reported that the hotel’s breakfast was only soup and bread. We ended up getting something at Starbucks, which was not great, but was food. We ran into Liz and Wendy, who got us to the actual venue. Big Sight is huge, and there was some danger that we’d just wander around aimlessly until someone took pity on us. Fortunately, that didn’t happen.

Actually, YAPC::Asia had already prepared us for this, so it wouldn’t have happened anyway. They not only posted step by step instructions on how to get to the conference area, they posted a video. This blew my mind. It walked you through getting from the main entrance to the conference area. You could pull it up on your phone and follow along and eventually you’d be there! The conference area was pretty busy. The volunteers were getting things ready, the attendees were showing up, and I was just sitting around zoning out. I wasn’t too worried about getting registered first, and eventually I got my stuff and we got started.

I saw Larry’s opening talk, which I’d seen before at FOSDEM and Salt Lake City. I wondered how many of the people in the room had read Lord of the Rings and the Hobbit, which got me wondering: how great would it be to give a talk based on an elaborate Soto vs. Rinzai metaphor? Well, I think it would be great, but I think I’d be one of very few people to enjoy it. Also, I’d have to relearn a lot of the things I’ve forgotten over the past fifteen years.

Anyway, after Larry’s talk came Kelsey Hightower talking about Kubernetes, which was quite interesting and included a lot of flawless live demonstration. This was the first of many talks on containers at YAPC::Asia. I wish I’d been more awake for it! Sadly, I spent a lot of the day half awake. There was a provided lunch, at least in some quantity, and Karen and Marylou and I managed to get in just before they ran out. We had bento boxes, and they were tasty. I also got my hands on a Pepsi Refresh Shot, which was basically a five ounce can of Pepsi’s version of Jolt Cola. I had a few of these during the conference. My consumption of these was definitely way, way below my Pocari Sweat intake, though.

After lunch, it was time for Matz’s talk… in Japanese! Of course it was, but for some reason I’d held out hope that there would be English. Carlos, who I’d meet later, told me I could go find the same talk in English online, but I have yet to do that. I will, I will…

Casey gave a talk on distributed teams, which reminded me that Hackpad exists! I need to figure out whether I’d find it useful the way I used to find similar things useful. My guess is that since I haven’t missed those very much, I’ll live without Hackpad. Still, might be fun.

After that, I tried to stay social in the common areas, and time flew by. Pretty soon, it was time for the conference dinner. There was a huge spread, never-ending beer, and a really high ceiling, so the acoustics were good for conversation. I think I ate about four pieces of ziti and drank a fair bit of beer, but I think I was too jetlagged for it to have any effect on me. (There’s a thought to file away for future trips, I guess!)

At previous YAPC::Asias, I found the dinner somewhat difficult, because it wasn’t easy for me to go chat up random attendees, and I was very rarely appraoched by anyone there. This year, for whatever reason, that didn’t seem to be a problem. I spoke with quite a few attendees, both local and foreign, and had a really good time. One attendee, who told me he was mostly an Android programmer, asked me about Perl 6. “I hear it’s got some backward incompatibilities.”

This kind of question would be inconceivable at YAPC::NA. Everybody is there because it’s a Perl conference. YAPC::Asia isn’t, really. It’s a technical conference with a strong Perl heritage. One way to think about it is that it’s a very good general tech conference for software engineers, but which has a much better chance of having a bunch of Perl content compared to a conference run based on trends. Going to a conference with lots of people from outside your usual circle is a good idea. If they’re experts in the kind of thing you’re not, even better!

This reminds me of the stories I’ve heard about people who up and decide to go attend a conference for psychologists or architects. Maybe I should do that, someday, too.

After dinner, a group of us headed back to the hotel, intended to have another drink before bed, but the hotel bar was full of people dancing in a circle and beating drums. I took it as a sign, went upstairs, and collapsed.