notes on drawing programming for children

Once in a while, my daughter asks me to teach her programming. We’ve done a number of little things together, including some Python, some Scratch, and other things. When I was trying to think of what I enjoyed doing with computers around that age, one of the things I remembered was drawing. We did turtle graphics with Logo in my school, and it was nice to get instant and visual feedback of what the program did. I thought this seemed like a fun idea.

I had looked at using Scratch for this, but it didn’t seem likely to work out. Scratch is neat, in some ways, but terribly limited in others. I decided we’d stick to Logo. I downloaded ACSLogo, the only gratis OS X implementation of Logo I could find. At first, it went well. We drew some stuff. She drew a vampire girl. 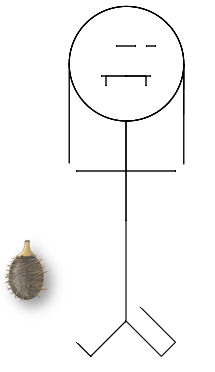 I wanted, next, to show her how to do some of the more commonly-seen tricks, like rotated squares making a flower. This is simple: you define a function and call it in a loop. Then I realized that ACSLogo had neither of these things. Or, worse, it had functions, but they weren’t defined in the program text. You have to bring up an inspector pane, edit them across several different GUI widgets… it’s a mess.

Fine, I said, forget it. There are other languages specialized for drawing stuff! I decided to teach her PostScript. We’d already played with RPN calculators, so we were halfway there, right? She was a natural. I showed her this little box-drawer:

…and she said “moveto, and lineto, but don’t use goto!” I don’t even know where she picked this up. Kids these days!

Anyway, she drew a skull, and it was awesome: 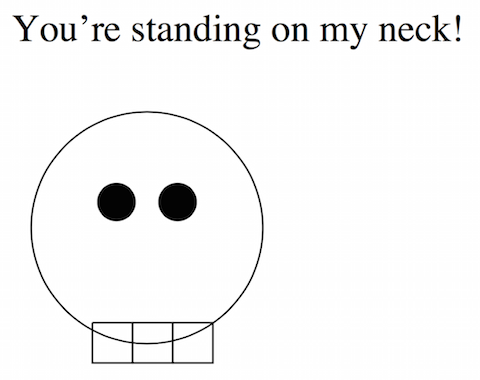 Those three squares were going to be a lesson. After we did one square, we could turn it into a square subroutine! Only as I began to say this out loud did I remember that like only the most backward of languages, PostScript routines did not have parameter lists. This is pretty obvious, of course, but I hadn’t thought of it until I got there.

A routine to compute a²+b² would look something like:

If you wanted to actually get “a” and “b” to use, you’d write something like (and please forgive the fact that I will get this wrong, probably):

So, you declare that the next two definitions are local, then you define named routines that return the values you’ve popped off the stack, in reverse order, of course… this is not something you want to bother teaching a second-grader who just wants to draw a cool skull.

(It gets a lot worse, if you care about the program, actually. The above program re-alloctes a new local dictionary every time you call the routine. In reality, you’d want to move that definition outside the routine, then swap the routine’s definition in and out of the dictionary stack. But then it isn’t re-entrant! This gets easier if you’re using Level-2 PostScript, but my reference is only for the original version with no garbage collection.)

I seriously considered writing a PostScript preprocessor to allow for something like:

…but this was bordering on madness. PostScript has so many other drawbacks to begin with that I took this as a sign.

I looked for another version of Logo, found one, bought it, and found that it, too, had no procedure definition. I got a refund. Thanks, Apple Store!

Finally, I learned that Python’s Tk system comes with turtle graphics. We’d already done some Python, so this was familiar! It was a lot easier to work with, we could write named functions, and the kid was pleased that TextMate had good syntax highlighting for it. She made the long-overdue flower: 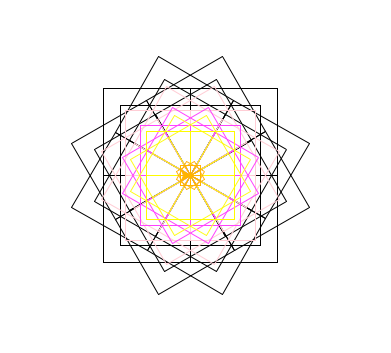 Next up, I’d like to make it easier for her to run the program without a bunch of terminal nonsense and “hit a key to continue” stuff. Still, so far so good. She tells me that when she gets older, she’ll be a better programmer than I am, because her programs “won’t have bugs.”