In Soviet Minecraft, server op you!

A couple weeks ago, my daughter became interested in Minecraft. She’d tried it before and thought it was interesting enough, but this time she seemed to have a more abiding interest. She did a bit more flipping through the Minecraft Essential Handbook and made a few things from it, and had fun, but was finding it just a bit tedious to have to gather all the resources she needed. Still, she built a simple house in the trees, explored some nearby caves and villages, and kept looking through the book… and then she found reference to creative mode. I showed her how to play in creative mode, and she was elated. She was even more excited when she found out she could fly.

We played some LAN games, which was fun, but I knew I’d want a server. I wanted to be able to muck about when she was not playing, and I knew she’d want to play when I wasn’t home. To do both those things in one shared world, we’d need a server. I asked some friends, who said it was easy, but all of the instructions I found online had a bunch of steps, wanted me to add apt repositories, create system users, and so on. It just looked like a big drag, and I started to consider just using Minecraft Realms, Mojang’s “we host your Minecraft world for you” service, but at $13 per month, it was enough to make me want to put a real effort into getting the service running on my Linode.

I read through the instructions carefully, and realized that the whole thing was a big complicated way of saying:

Well, I could do that! Once I realized that, I had a running server in a minute or two. Wow! I spent just a little time updating the server configuration, then rsynced the kid’s Minecraft world files to my Linode, and it all worked!

I knew that sharing a Minecraft server with a seven year old might lead to angry times later, when one of us wrecked the other one’s work product. I declared that we’d each have a big hunk of land where we’d be in charge. We could visit, but not build or destroy stuff without permission.

This led to an obvious logistical problem: how would we get from one place to another? Minecraft has a teleport command, and I could’ve left it available, but teleporting works by map coordinates rather than named locations. If I wanted Martha to be able to teleport home, she’d need to know the coordinates for her home. I could put them on a sticky note, but that would surely get lost immediately.

I decided to solve the problem by building a point-to-point teleport network!

You can build loads of amazing stuff in Minecraft by using “redstone” devices. This is sort of code for “electrical stuff,” but it has its own physics, and you don’t want to think of it too much like electricity or you’ll end up deeply confused. You can’t build a teleportation booth out of things you can mine in Minecraft, but there’s something you can use as a bit of a cheat: the command block. It’s a block that, when powered, executes a console command… like /teleport.

I build a pair of booths, each with a button. Push the button in booth A, and you’d end up in booth B. It worked the other way, too.

This was a good start. We had our own places, we stuck to the rules, and we had a good time. Martha started to ask about inviting some friends to our server, which led me to realize that booth-to-booth teleporters would not scale. I could build a targeting system, but that would become very complicated quickly. Instead, I built a hub. 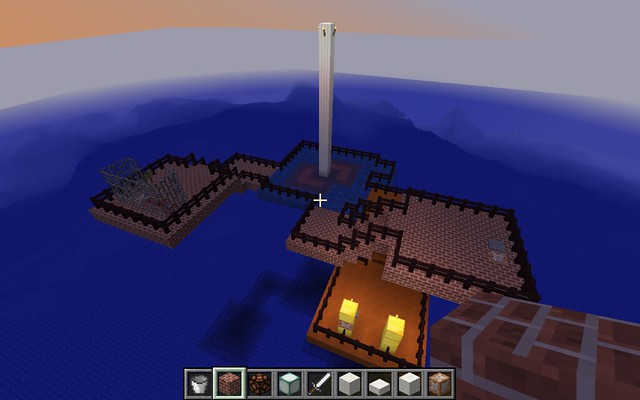 I left the two booths in place, but now instead of linking to each other, they’d drop you at a floating platform at (0,0) on the map. This place, “the hub,” was meant to have eight sub-platforms, each with a teleporter leading to a new place. I scouted out some locations and set up a few machines ahead of time, but not all of them, just enough to show how it would work. It worked great! Mostly!

Martha kept having weird problems. Parts of the network would work for me, but not for her. Then, it would all work. Meanwhile, I was struggling with spawn protection. This feature prevents users from editing the world near the spawn point. Without this, some jerk could fill the spawn point with lava, or solid stone, and when a new player joined, they’d be stuffed. I wanted to set the hub as the spawn point, and then keep it from being edited. It just didn’t work.

Eventually, I realized that the problems were related. Spawn protection disables redstone inside the protected area, which meant that the teleport machine buttons didn’t work. So, why did it only affect Martha? Because I was an operator, and could still use the button inside of protection. Why only sometimes? I really didn’t want to have ops on myself, so I kept disabling it. When there are no operators configured for a server, spawn protection is disabled. Yow!

I didn’t really want to make everyone operators, and I did want a protected hub area. I’d have to figure something else out.

The Stupidest Thing That Could Possibly Work

I did a lot of searching for solutions, and I found them. They were almost always in the form of “mods.” Those are plugins to change how the Minecraft server behaves. As far as I could tell, they always worked by having you first run a modded server. That’s a replacement Minecraft server which is, itself, a Java subclass of the base server. The most popular of these, Bukkit, was recently removed from distribution because of alleged GPL violations. Its whole situation is, to me, an unclear mess.

The new thing people seem to be using is CanaryMod. It’s entirely unencumbered by any sort of GPL issues, but it (like Bukkit, actually) only supports Minecraft Server 1.7. We’ve been running 1.8, which is a big difference. Of course, there are some bleading edge nightly builds that are 1.8, but… I felt like this was going to lead to me spending time writing Java or hanging out on a phpBB, and this thought killed all my motivation. Surely, I thought, there is some stupider, easier way.

Well, here’s what I did:

When you run that java command up above, the Minecraft server starts on your console. It prints out some status messages, then as the game goes on prints out logins, logouts, the results of various messages, and all of the global chat. Importantly, it’s also an operator console. You can key in commands that get run with superuser privileges. Obviously, if I wrote a program that owned pipes into and out of the server, I could monitor what was going on and execute operator commands. It would be a grody hack, but it would work!

I thought about using Expect, but decided that I’d be miserable. I tried to remember how to write this kind of thing in Perl, but couldn’t remember a few key bits about non-blocking I/O. I asked Dominus for a reminder and he said “Expect!” I didn’t take the bait.

By the evening, I had a crude prototype working in pure core Perl, but getting there involved some annoying things. For example, I had to keep calling waitpid inside my read/write loop, and I knew that if I wanted to add more non-blocking behavior, it would just get worse. I needed an event loop. I had a look at using IO::Async, which I keep meaning to use in anger, but it wasn’t immediately obvious how to proceed, and my goal was to deliver something (to my seven year-old) rather than to do something elegant and modern. I was already using Perl, right? Anyway, when I want to get something really cool done and I don’t care what people think of me, I use POE. I use it badly. It worked, as usually, really well.

Basically, the setup is this: my POE program runs the Minecraft server with non-blocking a linewise event machine. When it gets lines from the server, it decides whether it cares about them. Mostly, it cares about chat. Occasionally, it cares about other status updates, but it mostly ignores those. As for chat, it looks for players saying commands, just like an IRC bot. Players can say !home to be teleported to their home, or !set home to decide where that is. They also have a “porch,” and can !set porch to set that location. The porch is where another player goes if they try to !visit player. They can switch between creative and survival modes.

Setting home was a tiny bit interesting to implement. There’s no command to get a player’s location, so how could I save it? Well, if a player is teleported, their location is logged. Teleportation can be to a location relative to a player’s current location. So, to set home, you register a callback for “do this when the player next teleports” and then immediately teleport them to their current location, plus a 3-D delta of (0,0,0). Ha!

Something I knew was important to Martha was the ability to skip night time. I could have disabled the day/night cycle, but I knew that it would also be nice to have it enabled sometimes, for adventuring. I added !sunrise and !sunset commands. This wasn’t going to be good enough, though. When she invites friends, they will surely argue about whether to change the time, so I made it a voting system. As soon as one player casts a vote for a time change, the other players have thirty seconds to also vote. Whatever change is requested wins. In the event of a tie, nothing happens. Critically, once everybody online votes, the change happens immediately. This is most critical because if you’re playing alone, waiting thirty seconds for opposition stinks.

Actually, I lied a bit. The voting doesn’t end when everyone online votes. It ends when there are at least as many votes cast as there are players online. This can be a bit weird. Imagine:

Getting the list of currently online players is easy, but not trivial. The list command prints out the current count of logged-in players, then their names. To gather that properly, I need to get the first line, then intercept the next n lines, then fire off a “updated roster” event. I haven’t bothered yet, because I’m guessing it’s just a bit more pain than it’s worth.

A simpler solution, which I may implement if the server becomes popular with her friends, would be to notice logout events and immediately cancel the votes of disconnected users. I could also add some facility for speaking to the server over RCON, but… again, I’m guessing it’s not worth the bother.

If I had any next steps actually planned, they’d probably be:

For now, though, I think it’s good enough. I’ll wait for its overwhelming success with the kids before putting more time into it.

Meanwhile, I have published the code. As I said, it’s a hot mess. I barely know how to use POE, and I did not aim at all for maintainability. I just wanted it to work. I also have a bunch of code that’s copied from POE documentation, and could really be rewritten to be better. The whole thing should be turned into a MooseX::POE class for my own sanity.

Whatever, it works, right?

Soviet Minecraft is on GitHub.