I wanted to make an effort to learn some more languages, old and new, more or less continually as time went on. I started with Forth and Go, and did a tolerable job at getting the basics of each down. I didn’t do so well at writing anything of consequence, which isn’t too surprising for Forth, but I’m pretty sure I could be writing a lot more Go to get things done. I really do mean to get back to that.

Although I feel like I’m only about 85% done with what I wanted to do with Forth, I’m thinking about what I’ll look at next.

On one hand, Pragmatic Press is putting out Seven More Languages in Seven Weeks. The previous book covered Clojure, Haskell, Io, Prolog, Scala, Erlang, and Ruby. I thought it was just okay, but in part it was because I knew the languages well enough to see how the chapters could’ve been better. The new book is languages that I know, at best, by reputation: Lua, Factor, Elixir, Elm, Julia, MiniKanren, and Idris. Even if the book’s only so-so, it’s enough to get me going on a few weird-o languages. Also, from Forth to Factor? Woo!

On the subject of useless-but-influential languages, I just ended up with a pile of books on the matter. Stevan Little, Moose author and devotee of all programming languages past and present, is moving to the Netherlands, and couldn’t take all his stuff. “You know who’d like a book on Algol-60?” he asked him self. “Rik!” 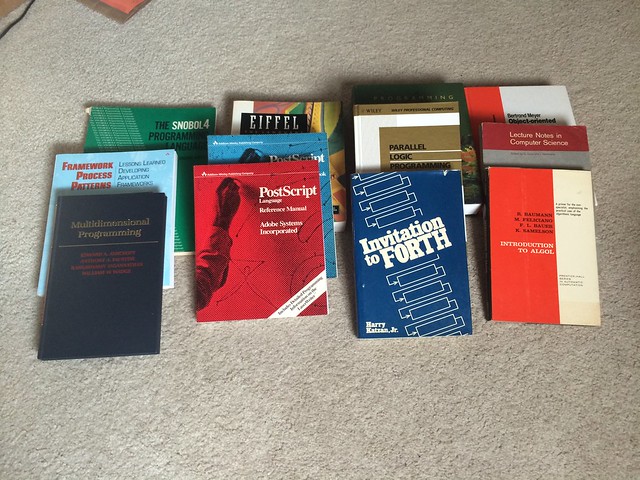 I’m not sure where I’ll start. The Forth book isn’t likely, as I’ve already got some. PostScript might be out for a while, since it’s a bit Forthy on its own. Algol is a good possibility, or maybe Eiffel. (I just finished reading Smalltalk Best Practice Patterns, so I may be in the mood for more “here’s how you do OO, kid” books.) I’m very interested in SNOBOL4 patterns, although I’ll have to see if I can find an implementation I can run.

Probably all of this will have to wait, though. This weekend, OSCON begins, and I’ll be taking in whatever I can there, rather than reading any dusty old books.