I went to YAPC::NA in Orlando!

A few weeks ago was YAPC in Orland, Florida, and I attended! I already wrote about the amazingly great video recording of the conference. It was great, and I was amazed. I watched some of the videos just today!

I thought I’d write down a couple more things that I remember.

I like good food, and lucked out finding places to eat at YAPC.

Monday, I found a little banh mi place, Banh Mi Nha Trang. It was great. One sandwich was about three bucks. I ate too much. Walt took a nibble of a pepper and declared it way too hot, so I ate the whole thing. Shortly thereafter, I was seriously considering whether I needed to request medical attention. I toughed it out, though.

On Tuesday, we got Cuban food at Latin Square Cuisine. I really miss having great Cuban food in Bethlehem at the long-gone Cafe Havana. Walt and I split halves of our sandwiches: one Cubano and one Pepito. The Pepito had potato sticks on it, which was a big deal when eating at Cafe Havana. I had a pineapple soda. It was great. (I was strong and avoided getting empanadas or tres leches, because I had to go right from lunch to giving a talk. It was hard, but I was strong.)

Wednesday, we got Asian/Mexican fusion tacos at Tako Cheena. It was the least awesome place, but I had no real problems with it. The water was a bit too cucumberry for me. I’d definitely go again, though. It seemed like a place worth going to try the specials every week.

Wendesday night was the big pay-off, though. Frew and Jerry Gay and I went to Cask & Larder, and it was great. The food was very good and the cocktails were great, and I would’ve loved to have stayed for another few rounds, except for the whole “alcohol is a poison” thing. I was especially pleased to have a drink that combined green Chartreuse and celery bitters, which I’d known in my heart would be a winning combination. It was!

I didn’t get a shirt.

Oops. Frankly, that’s fine. I rarely wear YAPC shirts, although the “Chicago flag with sigils” is an exception. That’s a great design. I brough home very little swag from YAPC, and that’s fine. As time goes on, swag becomes less interesting to me unless it’s really useful. Best conference swag ever? Notepads. (OSCON’s bookbag for speakers has also been a huge success.) Grant Street gave us USB batteries for charging phones (etc.) on the fly. I haven’t tried mine yet, so the jury’s still out. It could be a big winner.

Once again, there was a YAPC game night. I was taken aback (and flattered) by the number of people who approached me to try to get a seat at my presumed-certain-to-occur D&D game. I hadn’t planned one! Whoops. Next year I better get back on the ball!

Instead, I planned to play and teach Steve Jackson’s Ogre, a tank battle board game of some fame. 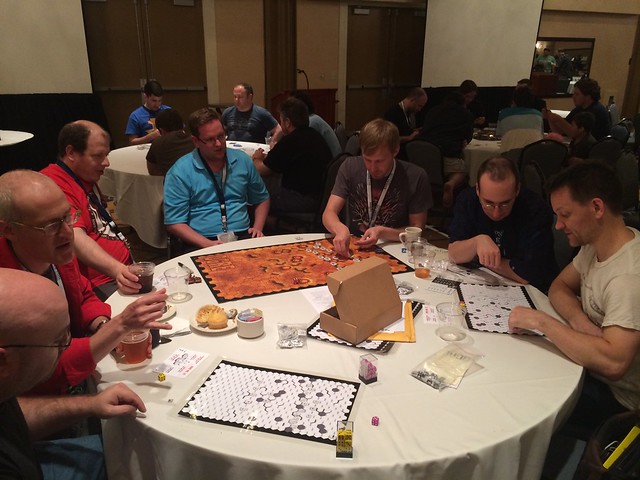 It was a success! I think I lost every game, but I’m not sure. Anyway, I had a great time, and at least 2-3 games of Ogre occurred without me after I showed the table how to play. I realized that one problem with running a game at game night was that I couldn’t try all the other cool games people brought, but that was okay. It was good to think that I may have created at least one or two new Ogre players.

I talked to other perl5 porters!

We had a little sit-down in the hotel bar and talked about what’s been going on. I previewed the yet-unreleased-at-the-time civility policy and did not get any panicked abort instructions.

I’m not sure what else was discussed, anymore.

I saw some talks!

I did. I also skipped a bunch, knowing that I could watch them later. I finally started doing the “watch stuff later” part today, and look forward to doing some more of it tomorrow. Among other things, I want to see Jesse Luehr’s talk on Rust and Scott Walters’ talk on programming the Atari 2600, but I’m pretty sure that reviewing the YAPC playlist will remind me of other stuff I really wanted to see.

I did not attend an auction!

I stubbed my toe.

I’m really tempted to post a photo of my toe, which still looks just awful, but I will refrain. Nobody needs to see my nasty toe.

I got zero programming done.

Every YAPC, I head out thinking that I’ll get a bunch of programming done. It basically never happens. Maybe next year, when I’m confident in the idea that there will be video, I’ll just sit in one place and chat and code. This year… I don’t think I wrote a single line.

When I wrote about going to !!Con, I said that it was hard to meet people when I didn’t know anybody to start with, and that I wanted to try to meet more new people at YAPC. I didn’t do a great job of following through with that, although I did better than I might have. It’s very hard, I am reminded, to say, “I’m sorry good friend whom I see only once a year, I need to spurn your company to go meet new people!”

I’m not sure I know the middle route, here.

Maybe I can form a marauding band of friends who go befriend new people and continue the pillage until the entire conference is one mass of friendly mayhem.