Steve Jackson is a famous game designer and his company produced big hits like GURPS, Munchkin, and Car Wars. Lesser known, to me, was his first game, Ogre. It’s a fairly simple tabletop war game, and it had a long and successful life beginning with its launch as a super cheap pocket game in 1977.

In 2012, Steve Jackson Games launched a Kickstarter campaign for a massive “designer’s edition” and I somehow ended up backing it. I don’t know what got into my head, but I somehow decided that I really wanted to play this game and that I’d rather buy a 28 pound steamer trunk of a game than a cheap edition off of eBay. My copy arrived about six months ago, and has been waiting to be played ever since then. 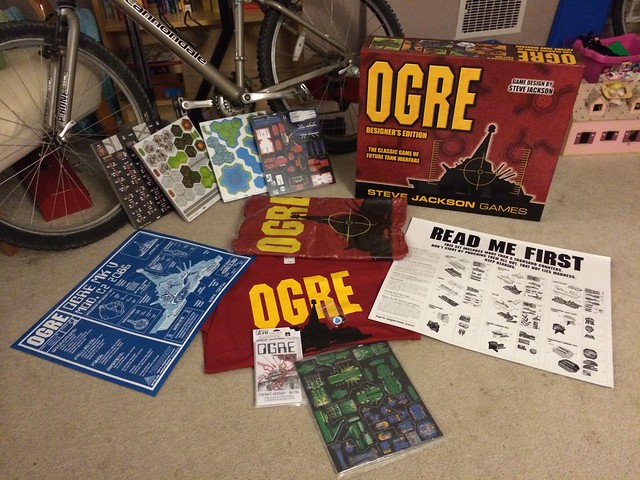 Actually, it did get played just once, but the game was me against my then six year old daughter. Although she’s got some strategic thinking in her, at the time she was just having fun moving the pieces around in random legal moves. It was hard to judge the game from that.

When my long-running D&D 4E campaign petered out, I suggested that maybe we’d start playing board games instead. I picked a date and declared we’d play Ogre. People seemed interested… but then didn’t deliver. No surprise, that’s why the D&D game fell apart. Fortunately, I’d intentionally overbooked the evening. My brother-in-law was the sole arrival, and that was just fine. Ogre, after all, is a two-player game.

The idea behind Ogre is that in the grim darkness of the future, there is only war. Or, at least, there’s a lot of it, and it’s being fought, in part, by gigantic artificially-intelligent cybertanks. What could go wrong??

In the basic scenarios, one player has an army composed of about three dozen infantry and armor unit. The other player has a single massive tank — the titular “Ogre.” The ogre’s job is to reach and destroy the defender’s command post, then escape. The defender’s job is to prevent one or both of those things from happening. It is tough!

The basic rules are simple and similar to many other war games. Every unit has an attack strength and a defense strength. The ratio of attack to defense strength determines the odds of victory. All combat is resolved with a single roll of a six-sided die. Attackers can combine their attack strength by making joint attacks. For example, two infantry units (1 ATK each) and a hovercraft (2 ATK) can make a single joint attack at strength 4. They attack the ogre’s railgun, which has a defense of 6. The ratio is 4:6, which is rounded down (always in the favor of the defender) to 1:2. The attackers will need a 6 to destroy the gun.

Figuring out what to attack, and with what, is tough. You can swarm the ogre with infantry and do some significant damage, but the ogre’s antipersonnel weapons will decimate your troops. You can focus on destroying the ogre’s mobility, but you’ll take a beating from its weapons while you do so. If you focus on destroying its weapons, it can still move, and that means it can still ram you.

Over the years, many more unit types were added to the game. New maps were created with different kinds of terrain that confer different bonuses or penalties. Different scenarios were devised to changed the goals of the game and the resources available to either side. The big box contains everything, and then some. Just finding a raised surface on which one could play with the entirely assembled set of geomorphic maps is no small challenge. 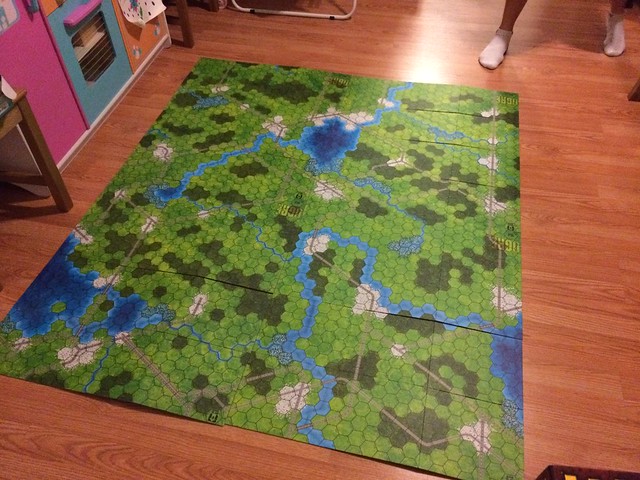 I’m not sure when I’ll get a chance to play more ogre, but the huge game in its huge box is interesting enough to folks that I’m pretty sure I can get more play out of it on that angle alone. Fortunately, too, it came with a pocket edition very much like the 1977 original. That one, I can drop in my messenger bag and take everywhere. I probably will do that for a while, too — at least until I lose too many pieces.